In Arizona, Many Choices for Republicans – NYTimes.com 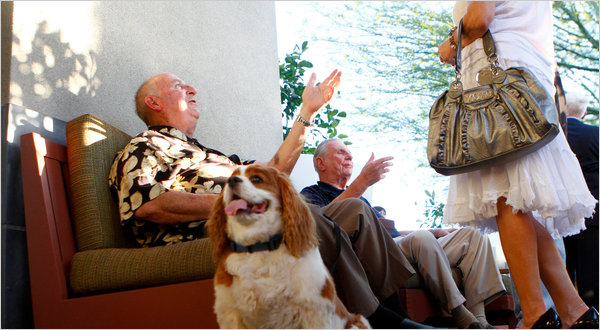 Pete Schlegel, with Rex, talks politics at Politics on the Rocks.

The Republicans who bellied up to the bar at a trendy restaurant here Wednesday for an evening of drinks and politics agreed on neither the beverages they sipped nor the presidential candidates they backed. But as the servers took order after order, and as the drinks fueled spirited conversations on the fledgling presidential campaign, one thing was clear: nobody felt as though they lacked choices.

The night was called Politics on the Rocks, a monthly social gathering for Arizona Republicans that is part town meeting and part night on the town.

In one booth of the NoRTH restaurant, which overlooks the mountains in northern Tucson, Charles Jensen, who organizes the happy hours, sat with his fiancée, Amy Averbach, whom he had met at an earlier event. And there was Paul Easton Lycos, a corporate lawyer who does a mean George W. Bush imitation and who also met his fiancée at Politics on the Rocks.

“One of the most impressive people I heard was Herman Cain,” said Mr. Jensen, who took a break from selling commercial real estate to tune in to the Republican presidential debate the other night. “Because he’s a businessman, and I’m a businessman, too, he speaks my language. He’s not a career politician.”

Miss Averbach did not disagree that Mr. Cain is a skilled orator, one she would relish to see debating President Obama, but she also brought up Representative Michele Bachmann of Minnesota. “I definitely have more research to do,” she concluded.

Mr. Lycos, slipping in and out of his ex-president persona, said his view was the most unconventional of all.

“I went into it not being impressed with Newt, but he surprised me,” he said of former Speaker Newt Gingrich. Then he brought up a candidate who was not on the stage in New Hampshire but who shows up in his living room regularly nonetheless.

“Trump would have pushed people out of their comfort zone,” he said, expressing a desire for Donald Trump to jump into the mix.

“If I had to vote today, I would vote for Newt, but there’s a long way to go,” Mr. Lycos said. “It’s a free-for-all. No one has emerged as the leader. They all have their problems, their issues. There’s no one who’s spotless.”

Out on the patio, Corrie Cruz, 28, a political science major at the University of Arizona, said she had been impressed with the frankness of Mr. Gingrich during the debate. But sipping on a mysterious drink containing a crushed lime, she said that she had a Ron Paul bumper sticker on her car and appreciated his free-thinking ways.

A fellow Paul admirer, Loren Charles, who owns his own business, sat across from her, with no drink in sight. “I agree with almost everything he says,” Mr. Charles said, even as he opined that Mr. Paul was the longest of long shots as far as winning the nomination.

“Mitt Romney is a very safe choice for the establishment,” Mr. Charles said. “He stands for nothing. Name one thing other than his health care reform plan in Massachusetts. Name one thing.”

Stuart McDaniel, a political consultant, was more charitable toward Mr. Romney, whom he had met and been photographed with during the 2008 Republican nomination battle that an Arizonan, Senator John McCain, won.

“I have a picture with me and Romney, but I can’t put it up,” Mr. McDaniel said, sipping a Sierra Nevada as the crowds thinned. “I’m this guy with no hair, who’s goofy looking, and he’s way too handsome.” MARC LACEY

A version of this article appeared in print on June 17, 2011, on page A18 of the New York edition with the headline: So, Whom Do YOU Like for President? Tucson, Arizona.

Tags: Charles A. Jensen, Charles Jensen, Politics on the Rocks